A Trip To Greenland

Once you’re already in Iceland, it would be a shame not to spend a few days on a trip to Greenland! Mysterious lands covered in a snowy white duvet; here the fjords form vast glacial tongues that slowly drop off into the ocean. Conquer peaks and glaciers! Let the strange magnetism of the far north seduce you and set sail for a fascinating adventure in Greenland!

Disko Bay is located on Greenland’s western coast, near the Baffin Sea. It was discovered at the end of the tenth century by Erik the red. Winters are fairly harsh (up to -18°C or -1°F) thanks to the polar climate, but summer here is a bit warmer than on the rest of the coast (8°C or 46°F average). During your stay in Disko Bay don’t hesitate to venture inland. Go for a walk in Inuit country and climb up slopes that offer breathtaking panoramas. Throughout the pure white landscape, the highest glaciers of the Arctic stand tall. There are endless activities to enjoy on location: kayaking, dog sledding, coastal cruises on seas of ice. 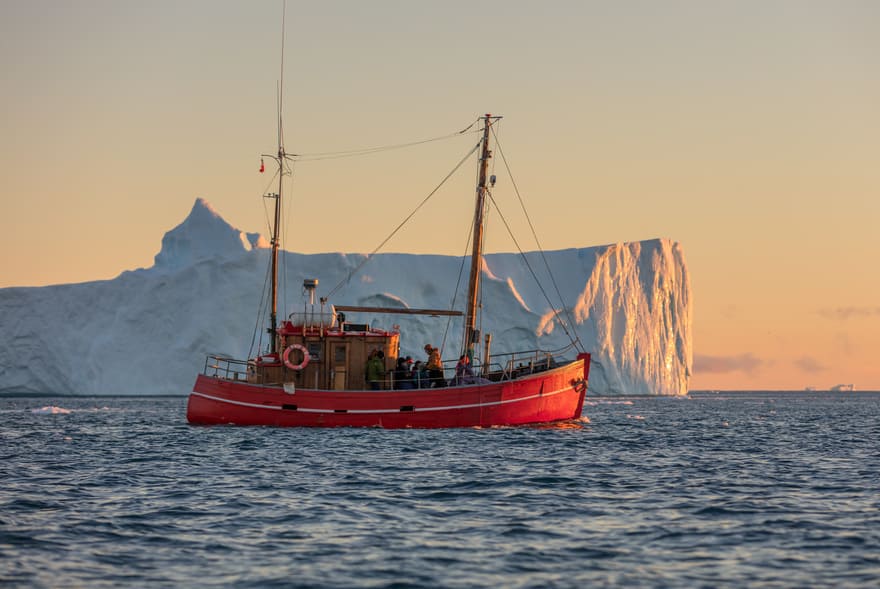 The Kangja fjord is one of the biggest iceberg calving zones in the northern hemisphere. Its’ Sermeq Kujalleq is one of the few glaciers by which Greenland’s icecap can get to the ocean, and is one of the quickest and most active glaciers in the world, melting from 19 to 35 metres per day and casting off an incredible amount of icebergs. This speed of production and the sites natural beauty have earned it a spot on the UNESCO world heritage list. The resulting icebergs are so big (up to 1000m high) that can stay stuck inside the fjord for several years before they melt enough to squeeze out and into the open seas. Ilulissat is a great place to observe all kinds of glacial phenomena, but the effects of global warming are particularly visible here, making it a good idea to visit before it’s too late!

Once called Nordrseta, the region was peopled by Vikings in the tenth century, until the Inuits arrived in the thirteenth century. The newcomers founded Sermermiut where they set up enormous campsites of up to 250 people. In the seventeenth century, however, they were forced to relinquish this settlement due to the return of the Europeans. During your holiday in Greenland, do not miss its most important archeological site! Sermermiut houses the relics of the Saqqaq, Dorset and Thulé cultures. 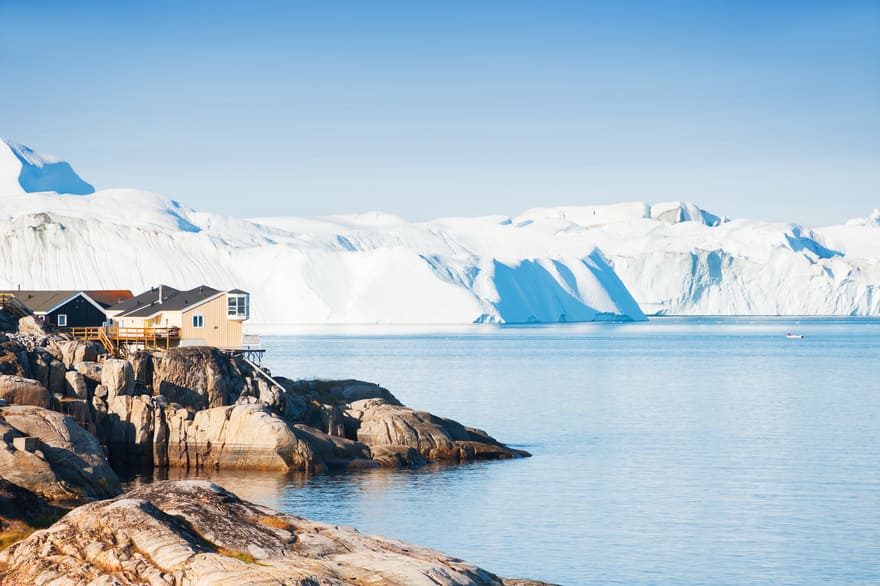 A Cruise on a Sea of Ice

Go walking around or kayaking through Disko Bay. You’ll admire the Nuussuaq peninsula. This garden of ice and rocks hides the villages of Saqqaq and Qeqertaq, preserved sites dripping with history. Not far from there, Torssukatak fjord presents a stunning ice labyrinth. If your planning permits it, spend a couple of days here exploring the surroundings. Ata and its ice archipelago is next on our list of must sees, especially as not many tourist know about it. Once you’re there, a beautiful hike will take you to untouched lands full of scattered glacial lagoons. When the conditions permit it, you can climb up and look out over Disko Bay and its icebergs, which look like cathedrals of snow. This will take about 4 to 6 hours but the path and slope are not challenging.

Next up in your trip to Greenland is the Quervain Bay, point of departure of the famous “French polar expeditions” that took place in the 1950s. You can follow the explorer Paul-Emile Vistor‘s footsteps on a two day hike around the icecap. The bay offers stunning views over glacier tongues, icy valleys, iceberg seas and more. You’ll really get to appreciate the location if you spend a night here in a bivouac. 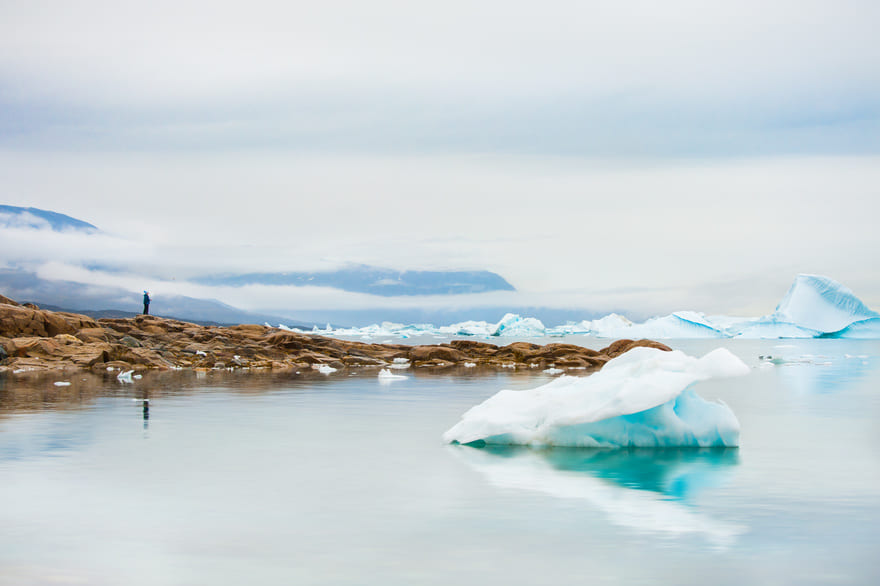 A Trip to Tasiilaq to Meet the Inuit People

A few hours flight from Reykjavik, Tasiilaq is the most important city of Greenland’s eastern coast. Nestled in the crook of a fjord and surrounded by towering volcanoes, the setting is enchanting. Not far from the polar circle this unique destination in the far north offers an exceptional opportunity to discover Inuit culture. Tasiilaq’ isolated surrounding region, Ammassalik, is one of the eastern coasts most picturesque. It boasts numerous winter and summer activities: hiking, sea kayaking, boating, traditional Inuit fishing, helicopter rides, dogsledding, etc!

During your stay in Tasiilaq, go the the great fjord of Ammassalik. Naviguating through fields of icebergs, follow the polar current and discover the Inuit villages of the east. You’ll happen upon seals and whales, and observe the creation of icebergs from the glaciers drifting towers the sea from the coast.
Soak in the light reflecting off the ice and go for a walk at the feet of the glaciers and mountains that the region is famous for. By ski or pulka, wonderful hikes await and offer up fantastic views of the surrounding icecaps. 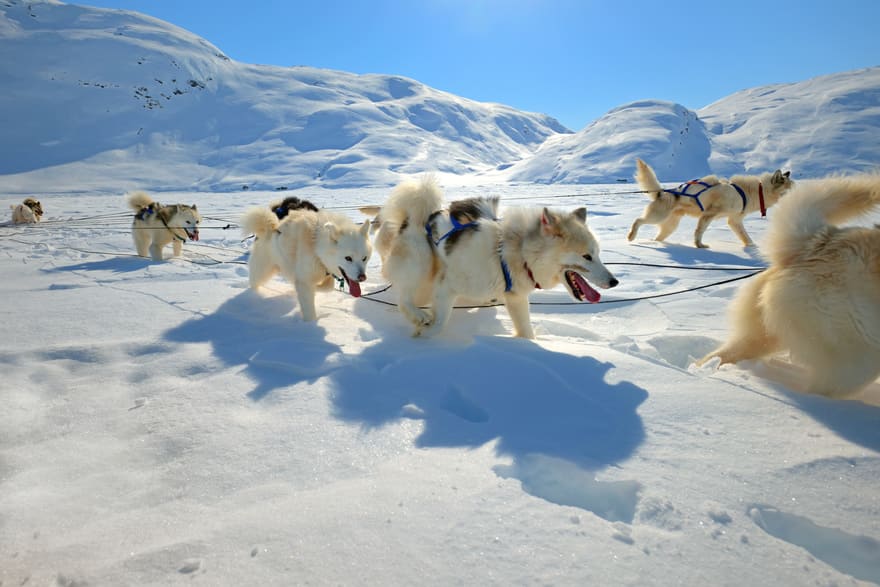 Land of Fjords, Glaciers and Icecaps

Sixty kilometres from Tasiilaq, discover the little village of Kuummiut. Accessible by helicopter or boat, this location is an ideal starting point for beautiful hikes at more than 1000m in altitude. The Kuumiiut mountain that looms over the village offers a breathtaking 360° view! Crossing the Tunu fjord, you can then follow the coast southwest to the foot of the Unnamed Mountain. From its peak (700m), a grandiose view of the Ikasak fjord opens up. Further down the fjord, ski lovers can speed down the Karale glacier‘s slopes. Stopping at the Unnamed mountain pass, the view on the ocean is magical. From here head to the Jura glacier where you’ll cross a 3 km long river of ice surrounded by imposing rockfaces.

Finally, pause by the tiny isolated village of Sermiliqaq “the beautiful frozen fjord“, and take a boat cruise to the island of Kulusuk. Country of fjords archipelagos, snow-covered mounts and peaks, the setting is phenomenal. Walking around the island and seeing its lakes and water sources makes for a beautiful day trip. 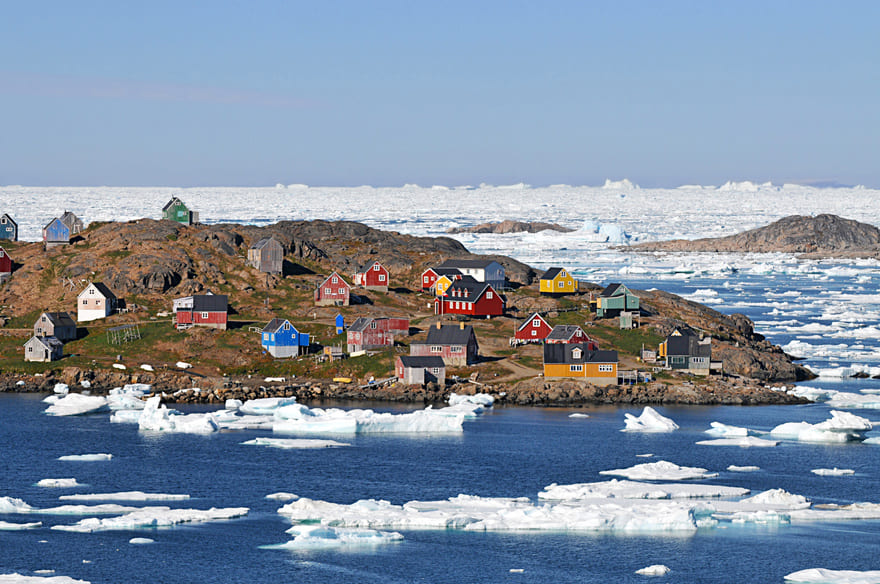 Practical Information for your trip to Greenland

From Reykjavik you can get to Greenland’s eastern coast by plane (a 2 hour flight). The airport is in Kulusuk, and the transfer to Tasiilaq can be done by helicopter or boat (one hour). Greenland’s eastern coast is more temperate because of the ocean’s influence. The temperature here is between -4°C and -12°C (10-23 degrees F) in winter. In summer, it is often over 10°C (50 degrees F).

Ilulissat, in the west, is accessible by plane from a number of Icelandic cities. Its takes about 4 hours to get there from Reykjavik, and 6 hours from Akureyri. You can also transfer there from Egilsstadir, Isafjordur, or even Grimsey.

Your Trip to Husavik

Your Trip to Husavik
Read article