Your Trip to Husavik

An Excursion to Husavik

The picturesque little village of Husavik, a fishing port on Iceland’s northern coast, attracts visitors far and wide thanks to its wonderful whale watching. Its proximity to the Arctic Circle makes summer nights in Husavik strange and surreal. Stare for hours during the summer at the “midnight sun”, a long twilight of changing light. Meanwhile, on a dark winter night, do not miss nature’s most spectacular show, the northern lights, dancing over the ocean…

Husavik, the Bay of Houses

According to history, Gardar Svavarson, Iceland’s first Viking explorer chose this little cove to settle down and build his house on after having sailed around the entire island. He then named the spot Husavik (hus meaning house, and vik meaning bay).

From Husavik’s harbour, head out to sea on an old fishing boat or sailboat! In the middle of Iceland’s northern fjords, from May to September you’ll see many whales and dolphins in the sea, and hundreds of puffins in the sky. A wonderful activity for any age!

If you loved the whale watching tour, stop by the Whale Centre once you get back on dry land! It houses a great exhibit about cetaceans. You’ll learn more than you ever dreamed about whales, dolphins, orcas, and all kinds of marine life!

Not far from here, you’ll discover the town’s charming church. Finished in 1907, it is considered to be Iceland’s most beautiful. From there, a little road climbs the hill’s flanks and leads to Safnahusid, an enlightening museum dedicated to the region’s natural and folk history.

– From Husavik, take the coastal road that leads to Asbyrgi (route 85, to the east). Rising over the ocean you can make out in the distance the snow-capped peaks of Iceland’s Central Highlands. Around Hallbjarnarstadir, if you look out to sea you’ll see the Lundey islands, Flatey and Manareyjar. Driving through many contrasting landscapes, you leave the verdant plains of the inner coast and enter the vast arid expanses around Dettifoss. Take a hike around here in the evening to experience the spectacular reflections of the sunset!

– Next, take route 864. Halfway between Husavik (87km) and Myvatn Lake (65km), the Jokulsargljufur National Park contains many waterfalls, most notably that of Dettifoss, Europe’s most powerful! You’ll be able to choose from many beautiful walks here. We recommend the one along the Jokulsa River, from the great canyon of Asbyrgi to the “echo cliffs” of Hljodaklettar. 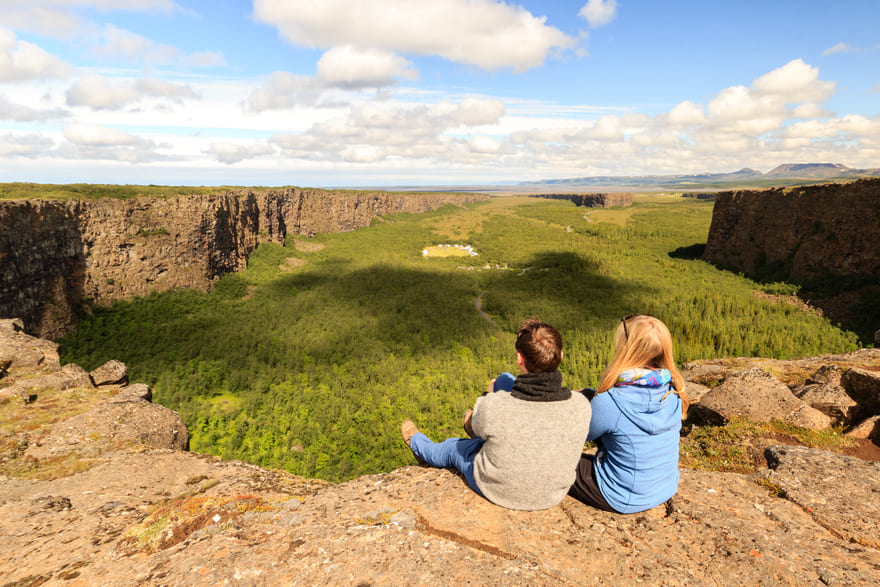 Your Trip to Godafoss

Your Trip to Godafoss
Read article