A Trip to the Snaefellsnes Peninsula

The colourful little port of Stykkisholmur is stuck in a narrow cove at the end of an almost island. Its rocky coast is populated by thousands of sea birds that get tossed around by the gusts of ocean wind. In this beautiful arctic landscape, little surrounding hills make for beautiful and convenient hikes in the middle of blueberry and blackberry thickets. In this land steeped in legend, the most well-known is probably that of Mount Helgafell. It is said that if one must climbs it in silence and reaches its peak, if they make three wishes secretly while facing the rising sun, they will come true. A have of tranquillity and serenity, from here the view over the region is exceptional. 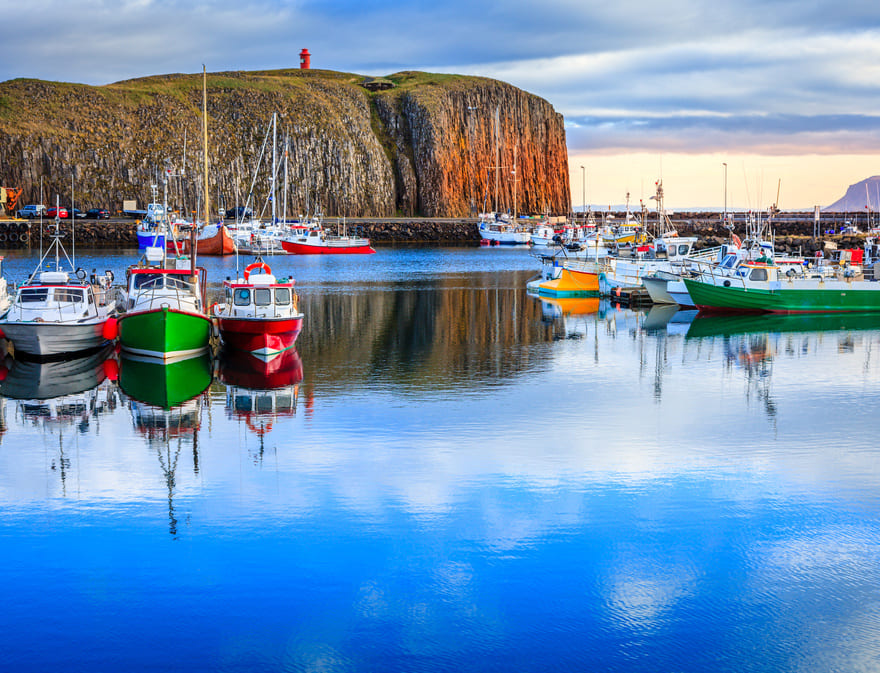 From the lighthouse, take a boat to Flatey Island and keep an eye out for the Blue Whales of the Gulf Stream. Lit by a soft midnight sun, this beautiful fjord crossing is unforgettable! Not only is the setting stunning, but the birds that live on the “”flat island”” have a reputation for being more approachable than anywhere else in Iceland. Swept by the ocean’s winds, the little wooden houses of Flatey Island’s village bring a touch of colour to this landscape of green grass and rocky coasts.

Along the oceanside driving west you’ll pass Grundarfjordur Bay. At the feet of mount Kirkjufell, you’ll appreciate the bustling atmosphere of this important fishing town, one of Iceland’s most active. Stop at Faites Ytri-Tunga to spot seals, and then get back on route 54 which you’ll take to the 574 in the direction of Olafsvik. You are now at the peninsula’s westernmost tip, where the impressive Snaefellsjokull looms, “”volcano with a hood of snow”” in Icelandic. The landscape is surprisingly geometric and it is here that the “”Journey to the Center of the Earth”” that Jules Verne wrote about in his book by the same name was started. 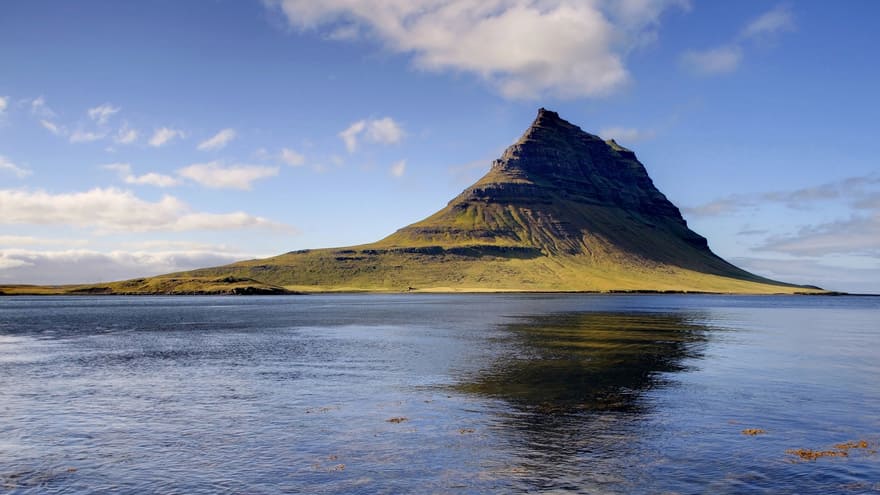 A wild land, constantly beaten by the winds, the western coast is uninhabited. From the Snaefellsjokull National Park, many trails lead you to the edge of the sea, notably the Dritvik trail. The meeting point of fire and ice, the beautiful walk will bring you through lava cliffs to the black pebble beach of Djupalon.

The Utnesvegur trail that cuts across the Snaefellsjokull National Park will take you to the southern part of the peninsula, to the little port of Arnarstapi. Niched in the depths of a cove in the middle of basaltic peaks, a magical ambiance drifts about the village. Every year at solstice, wizards and shamans reunite here, an event cloaked in the utmost mystery.

From here, get back on the coastal road amidst grazing sheep, buttercups and purple catchflies. Stop by the little hamlet of Budir to visit the Lysuholl hot water source, in the middle of jagged black mountains. Bathe in the thermal pool or ride an Icelandic horse. It will take you wherever you’d like: the ocean shore, along rivers and waterfalls or to the volcano’s feet.

Crossing the barren landscapes of the southern coast, head in the direction of Borganes. Stop at Snorrastadir and discover Eldborgarhraun’s incredible crater: steeped in greenery, it looms over a black lava field. Keep going and take route 1 and 50, then the 518 that will take you to the Hvita gorges. A havens of vegetation and sunlight, go straight to the waterfalls of Hraunfossar and Barnafoss, that fall between cliffs with deafening noise. Along the Hvita gorge, a number of breathtaking hikes await! 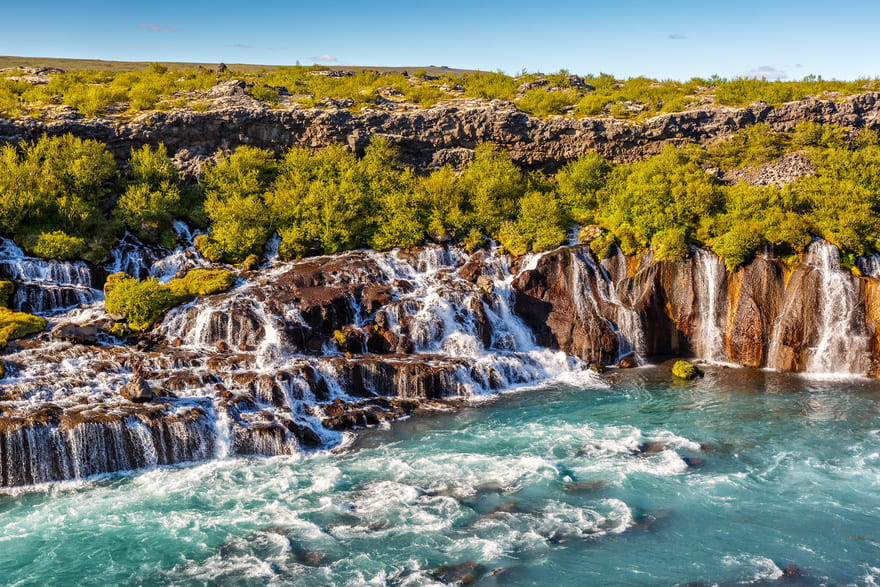 Route 54, which links all the ports on the peninsula, is accessible near Borgarnes in the south, and rejoins route 60 in the north near Haukadalsvatn lake. Route 1 that goes all around Iceland will take you there whether you are coming from Akureyri (250 km) or Reykjavik (70 km), but you’ll still have a ways to go before touring the Snaefellsnes region (about 300 km of coastal road)! The peninsula’s extreme west is only accessible by taking route 574, 6 km east of Olafsvik. It turns into the Utnesvegur trail, that finally meets up with route 54, 4 km before Budhir. In mid-August, don’t miss Stykkisholmur’s Danish festival: a guaranteed good time!

Discover the Snaefellsnes Peninsula with Iceland Like A Local

Driving and Hiking through the Westfjords

Driving and Hiking through the Westfjords
Read article