An Excursion to Geysir

When visiting Iceland’s Golden Circle, stop in one of the regions with the highest temperatures but also the most alive. At 120m in altitude, the geothermal hub of Geysir stretched into the valley of Haukadalur. Amidst verdant and flowery vegetation, the area is home to a number of surprising phenomena: geysers, hot water sources, solfataras, fumaroles, boiling mud pits, etc. A true spectacle of the elements, Geysir lives by the rhythm of the Earth vibrations.

Geysir, Journey to the Center of the Earth

– The region is world-renowned for its geysers. Its most famous, Geysir, have the geologic phenomenon its name! It is located on the western part of the Laugarfjall hill. Dormant for many years, the great geyser re-awoke following the earthquake in 2000. Since, it has been gushing irregularly, but never as high as the 60 to 80 metres it was known for in the Middle Ages.

– The Strokkur geyser is the most spectacular because it erupts predictably every eight to ten minutes. It emits a powerful column of steam that reaches from 20 to 25 metres. Right before its shoots off into the sky, a big turquoise ball forms on its top. No other geyser in the world does this.

– Not far from here is Blesi “the flame”. Two basins that are linked underground, but one is a hot water source of a deep blue and the other a cold water basin of a light opal blue. This color is due to the reflection of the sun on the silica within the water. The contrast between the two basins is astonishing!

– Besides its many natural attractions, the Geysir Center shows a multimedia film about Iceland’s volcanism. You’ll see footage from the most recent volcanic eruptions as well as information concerning the country’s geology that is great to complement to your visit of Geysir! 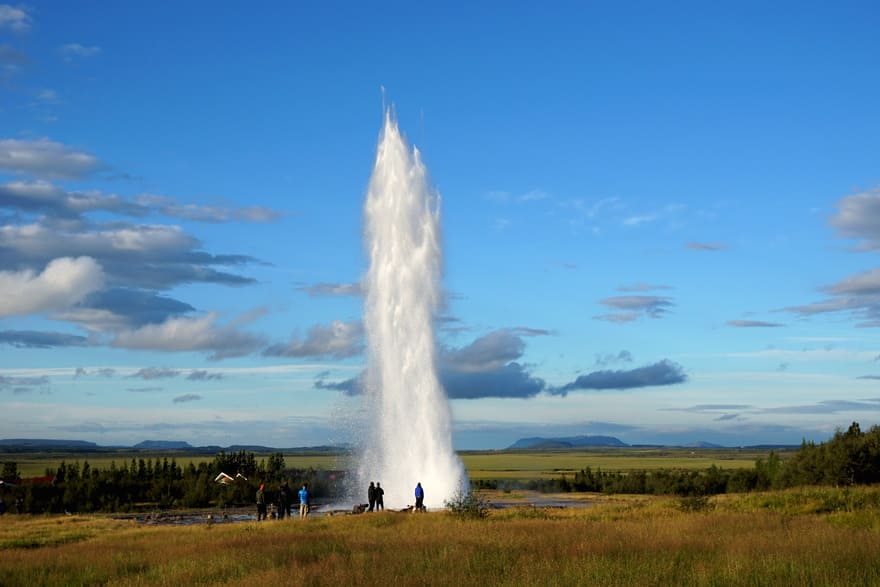 You can get there by bus as part of a guided excursion to the Golden Circle that takes off from Reykjavík, but you can also stop there on the local bus going from Reykjavík to Akureyri passing by the Kjölur trail in between the Langjökull and Hofsjökull glaciers.

You can also drive there from Reykjavík by following route 1 then route 35 (115km) or following route 36, then 365 the 37 which will take you through Thingvellir and Laugarvatn (about 110km). It will take about an hour and half to get there and back.